Glass and reflective surfaces are one of the many elements which birds have incorporated in their daily life. And the result of this interaction has caused some problems. Big glass structure buildings and the common windows of our own houses can deceive the perception of the bird on the wing because the glass either is transparent or reflects the outdoors and will irremediably strike against it. As a consequence the bird may result stunned, injured o even die due to the impact. The number of deaths produced by windowstrikes is so huge that solutions to counteract these effects have been studied in order to avoid these unwanted situations.
But it may also occur that a bird gets near a window pane or a shiny surface and sees the reflection of its image. What happens in these cases? Although the most generalized interpretation I have ever heard is that they see a rival and they fight it, there are also those who believe they are playing. In the bibliography this agressiveness is associated to males of aggressive or territorial species which in the breeding season behave in this way. When this season arrives environmental factors such as more light and temperature increase the secretion of certain hormones which prepare the bird for this stage. This hormonal efervescence influences, among other things, in their behaviour which makes them aggressive (they fly against the reflection, peck at it, scratch it) towards other birds, especially, those of the same species. This aggressive attitude may also be disadvantageous for the bird because the image never gets tired and the bird may result exhausted and become an easy target for predators. That is, it may indirectly have terrible consequences.
What behaviour should be expected out of the breeding season? With low hormones cohabitation becomes more quieter. Chasings or fights are not commonly seen between congeners. Would we expect a quieter behaviour when facing their image? Weel, not everything is rosy. Let's see Nicolás's examples which do not take place during the breeding season.

Chalk-browed mockingbird
Mimus saturninus
"On Friday March 14th I was at Puerto Madero, near the RECS, where I see a chalk-browed mocking bird on the roof of a parked car. It was concentrated watching its own image reflected on the windscreen. It stayed a long time in this position and then explored all the other parts of car (hood and roof) and finally flew away.
ATTITUDE contemplative and curious" 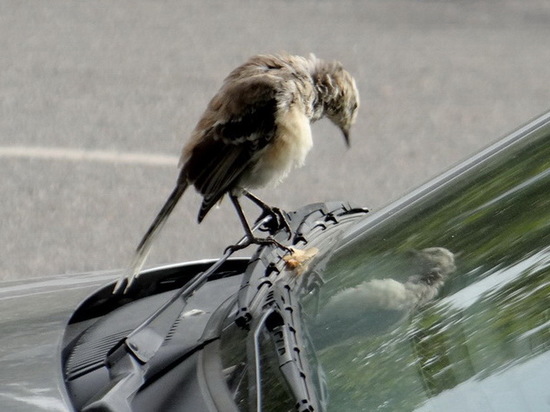 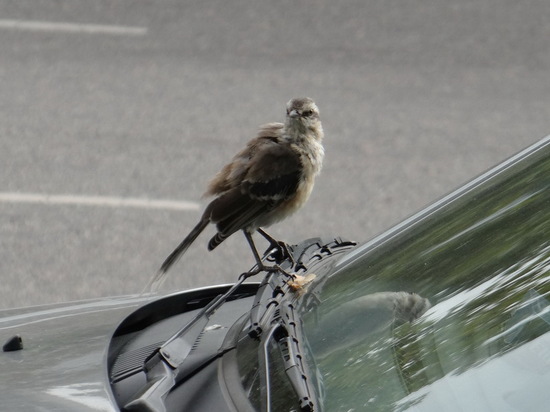 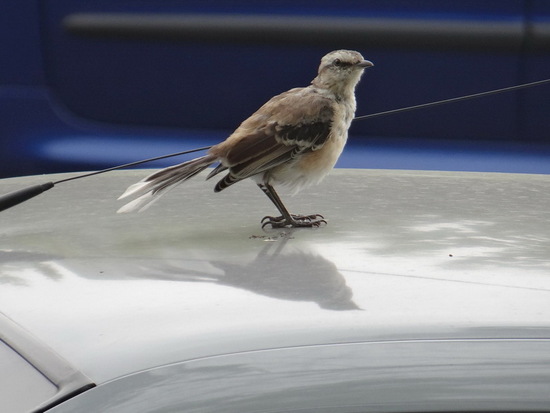 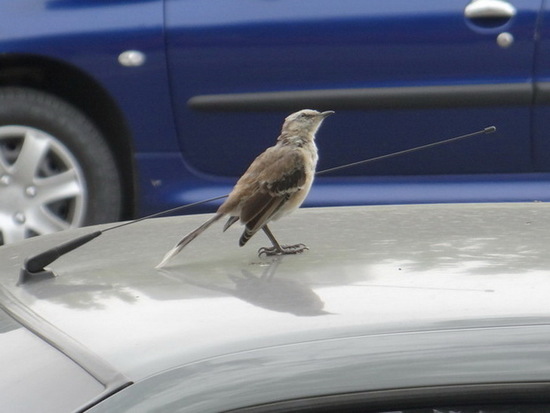 Golden-billed saltator
Saltator aurantiirostris
"On Thursday May, 8th I was at the RECS, near the Visitors' Center at the Brasil entrance when I heard some pecking similar to that of a woodpecker when drilling a trunk. It was clear drilling was not on wood but on glass. I saw a golden-billed saltator at the windowsill of the cabin. What was it doing?
Well, it was looking at its own image on the window. Suddenly it charged against it and attacked it. It then stood on the sill and pecked at its "rival" producing the sound when it struck the window. The bird realized I was there but it did not mind and went on to the other windows and behaved in the same way. This attitude lasted some time and I then left the scene. Fluorescent light and people working could be seen through the window.
ATTITUDE aggressiveness to an opponent." 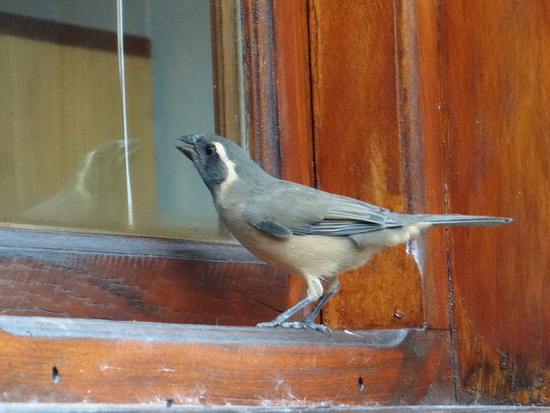 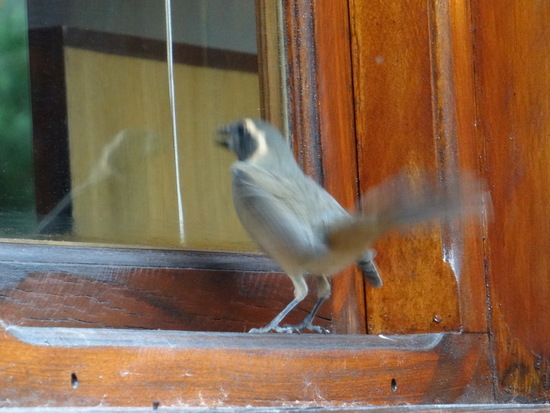 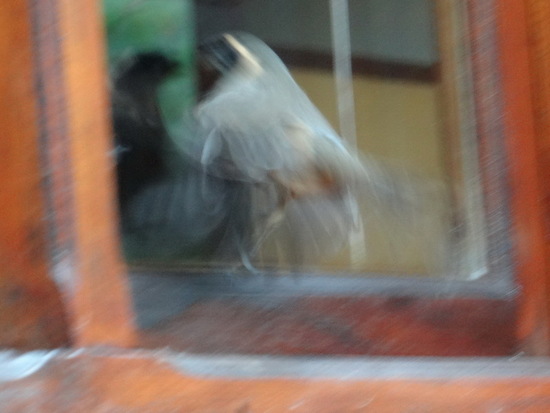 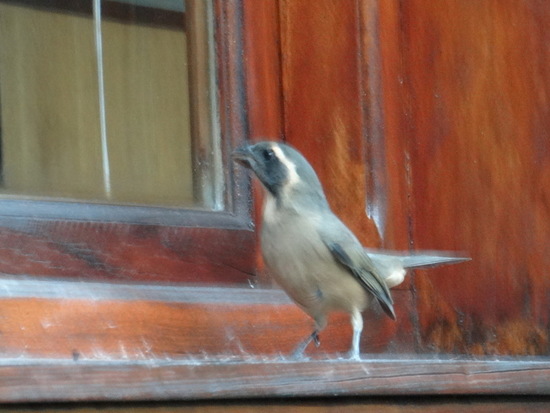 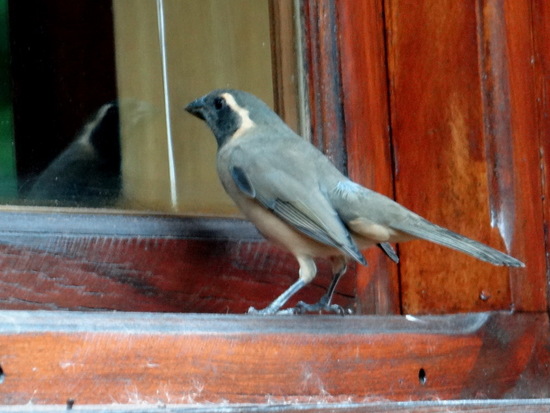 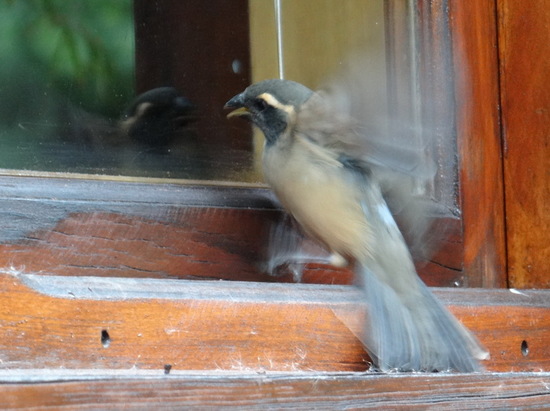 Red-crested cardinal
Paroaria coronata
"On June 10th at Puerto Madero this red-crested cardinal was on the car roof looking at its own image. At times it looked for a rival and sort of attacked it not aggressively but wanting some reaction. At other times it vocalized as if asking the rival to participate. At some other moment it slid tailfirst down the windscreen and down there it observed the glass and explored the windscreenwipers as if playing and discovering things. It flew to a nearby tree and back to the car. I think it was having a great time!
ATTITUDE ambiguous: Observed, studied, innovated, played, encouraged to participate, attacked as if stimulating the rival but not aggressively. It enjoyed a lot and sang with a feeling of satisfaction." 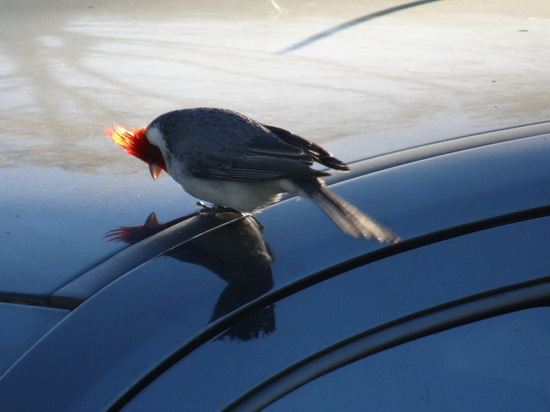 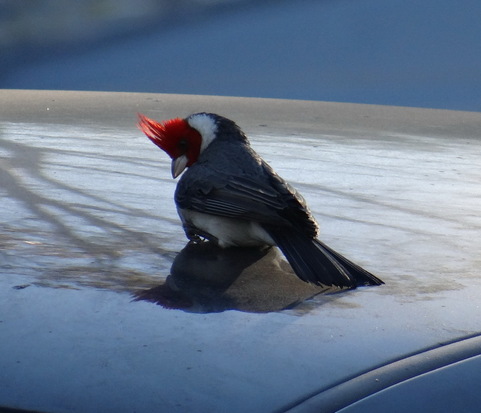 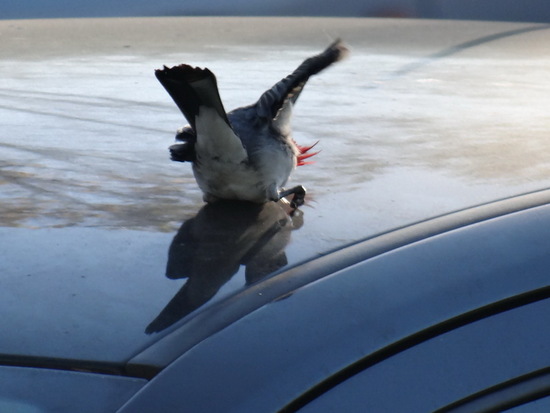 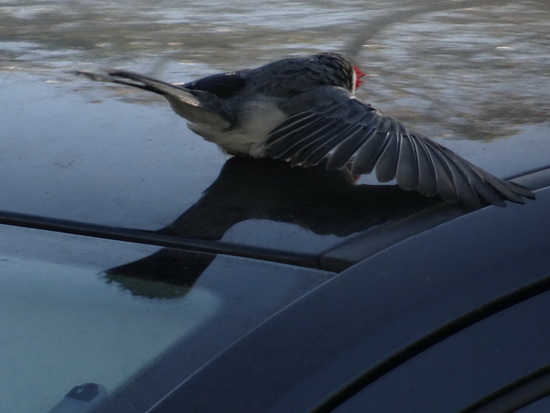 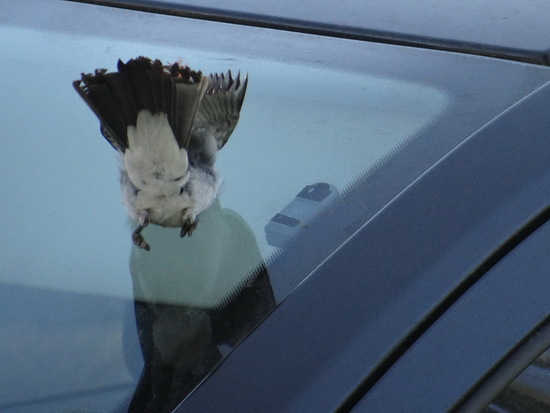 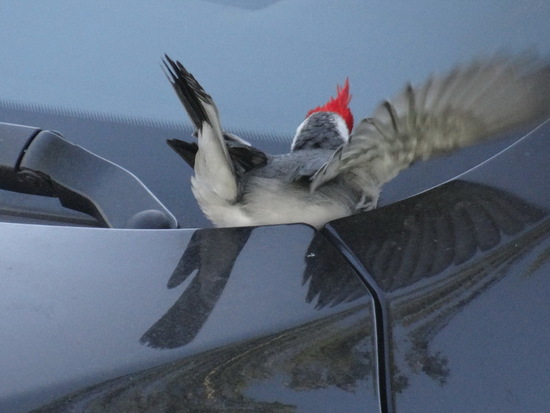 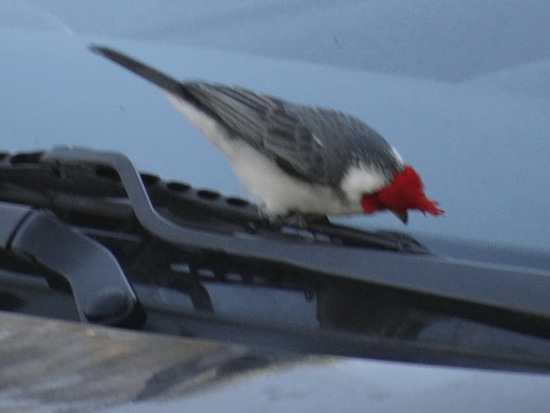 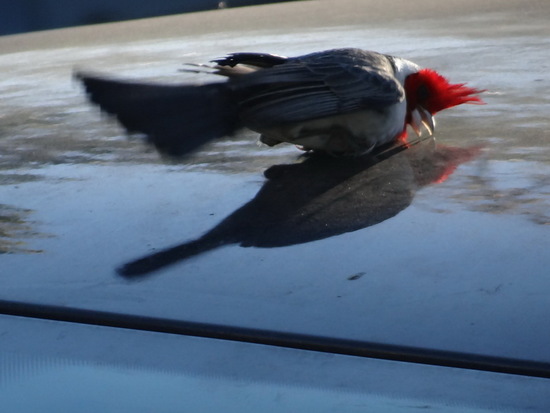 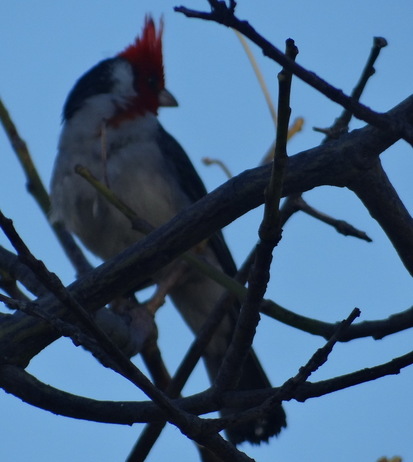 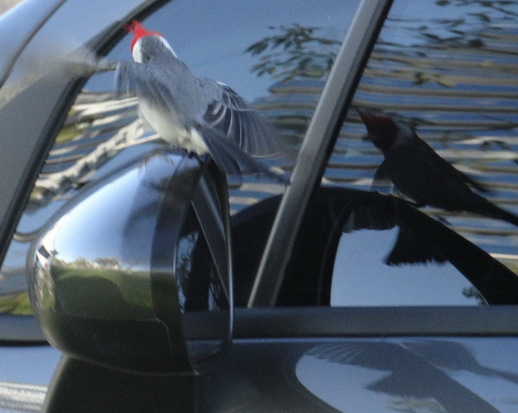 
Three individuals of different species, three different behaviours. No active reaction as if waiting for the other bird to take the first step. Since there is no action it loses interest and leaves. A second behaviour of aggressiveness. And last but not least an exploratory behaviour. Attracted to its image, curiosity made him experience different methods of communication with the other subject. We do not know if they learn something, let alone if they will remember something next time they face their image.

From my point of view these are individual experiences and this behaviour should not be entitled to the species. In the same way not all the species have the same abilities, not all the individuals of the same species should be expected to act similarly at least in the non-breeding season. We only have a couple of species which have ellicited a behaviour when facing their image. Is it that there are a few individualities or do we observe little? What is valuable in all these cases is that these situations are not predetermined. Birds act freely and the observer makes the most of this precious moment. What is complicated of this registers in the wild is the impossibility to follow these individuals and see how they react in future situations if there are. With such fragmentary information we must collect far too much data to tie up loose ends.