Checkered woodpecker - Following-up of a nest

29-05-11 © J. Simón Tagtachian
The checkered woodpecker is an annual resident at the reserve. We called it "carpinterito" for its small size compared to the other two woodpeckers at the reserve, the green-barred woodpecker and the campo flicker. but now a real "carpinterito" Picumnus cirratus has appeared and we call it its correct name. It is a bird easy to locate because of its habits and its call. It is 15 cm long and exhibits an attenuated sexual dimorphism. The male has a red line on the nape and a brown crown dotted white. The female lacks the red line on the nape and the crown is plain brown. To tell male from female facilitates the monitoring of the actions. A typical posture: to stick the head out of the nest and see what happens..

Nest located in a Tipuana tipu almost facing the water tank at the Viamonte end
20/9 When the nest is seen for the first time, there is already a well-rounded hole with an opening of 5 cm. The nest is built in a "tipa" branch where former holes can be observed. The construction is in an advanced state where the cavity is spacious enough to turn round in the inside. Male and female take turns to excavate the nest. From the outside drilling is heard. Then the woodpecker looks out with its bill loaded with chips. They are scattered right there with a shake of the head followed by a quick glance. They remove several mouthfuls of chips.
3/10 Work goes on in the nest.
17/10 There is no more building activity. Incubation has certainly begun. Male and female take turns to sit on eggs and changeovers take place at the nest. 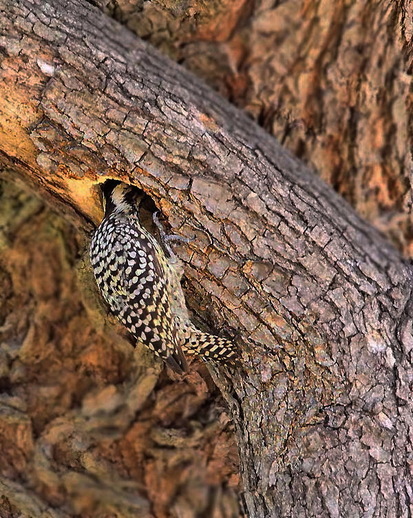 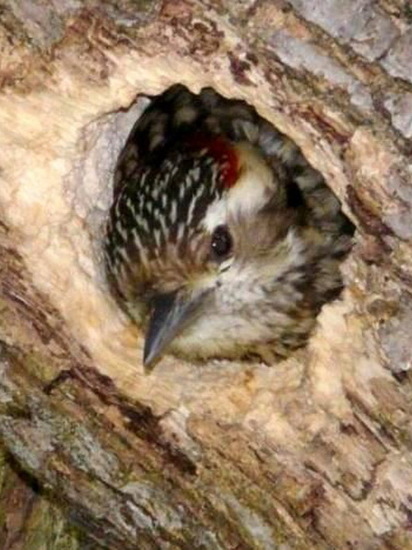 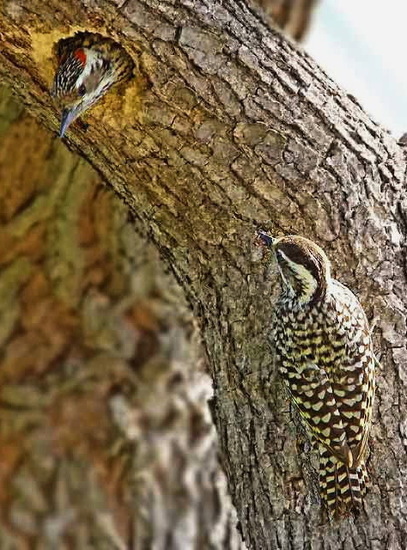 24-10-09 © José Luis Merlo
24/10 There is great activity in the nest. Parents go in with food which is quicky delivered. They provide live food: plenty of worms. The approach to the nest is gradual. They make two recognisance stops before going in. They are always on the alert. If something calls their eye, they fly away so as not to expose the location of the nest. First they perch on a nearby branch where they stay for a few seconds. With a short flight they reach a second position, always below the entrance to the nest, where they also stay for some seconds. From there they hop up the tree and dive headfirst. Done with the delivery, they resume food search. It sometimes occur that one adult arrives right after the other and has to wait outside since there is not enough room for everybody. The father cleans the nest. It removes the feces stuck in chips and gets rid of them far from it.

6/11 The nest "sounds". The noises of chicks claiming for food are heard. The adults are extremely busy with food provisioning. They bring worms, spiders, insects, etc. Nestlings are still not seen, but evidently they are growing. As parents reach the doorway, they look for the best way in. Bigger chicks imply more cleaning to do, always done by the male.
14/11 A chick looks out emitting the typical adult call. Two cues which show the maturation of the locomotive and vocal system. Unluckily it is not possible to see the developmental stage of wings. The nestling shows a distinctive red crown. The rest of the body can not be fully appreciated, but it seems to look like the adult´s. Since it stays in the doorway food is given right there. Parents must be careful not to be caught by the desperate pecks of the young. It is not clear whether there is a second nestling. On some occasions the female gets into the nest with food. There might be another less active nestling.
15/11 Only one nestling looks out. Strikingly it changes the call. While its parents are away for food, it utters the adult call. As they show up, ithe nestling changes the call into a previous weaker one. 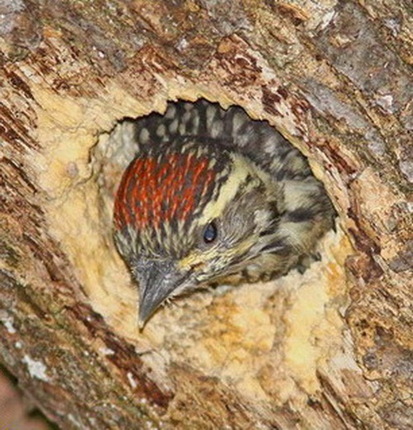 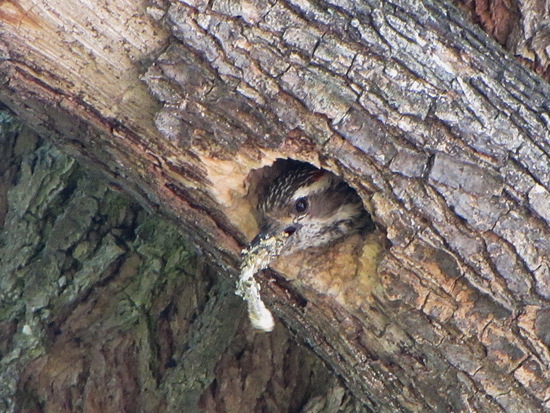 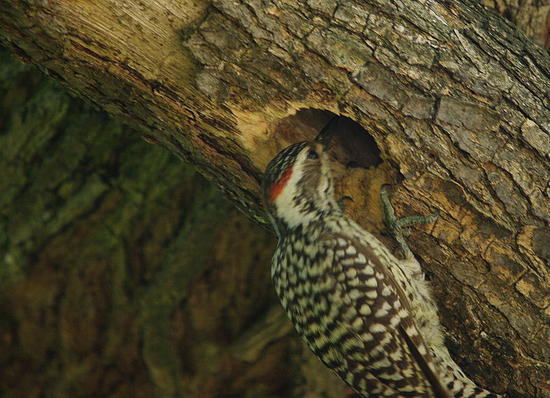 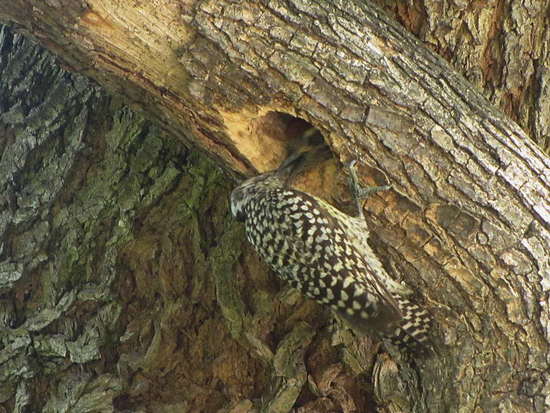 14-11-09 © Amelia Besana
20/11 The nest is inactive. Neither voices nor movements of the family are observed. Though the chick has already left the nest it is still dependent on its parents. They keeping feeding it outside the nest for a while.