The premises are land gained to the river with the goal of building an administrative center. When the project was abandoned, unfinished works remained dormant and nature filled it with life. An artificial and natural environment at the same time. Had this area not been gained, it would still be the river. Had man accomplished his primary goal, it would not be a reserve today. The man gained this space to the river, nature gained this space to man's indolence. And those who fought to preserve it as a reserve gained this heritage to the community. (Ver Entrevista a Tito Narosky).

On June, 5th 1986 according to the Ordinance 41247 it was declared Parque Natural y Zona de Reserva Ecológica to the land gained to the Río de la Plata in front of the Costanera Sur between Dársena Norte's pier and the Ciudad Deportiva del Club Boca Juniors.

Law 21.825 details the extension and limits of the premises:

“Lands gained to the river and those to be gained, with an approximate surface of four hundred and fifty hectares (450 ha.) comprised within the following limits: to the North the pier of the Harbour and extension of its outer border (line I-II-III-IV); to the West the wall of the Balneario Municipal Sur (línea I-VI); to the South the line established by Law Nº 16.575, as the northern limit of the Ciudad Deportiva del Club Atlético Boca Juniors (line VI-V); and to the East a perpendicular line to the previous one which begins at the intersection of the N. and E. limits established by the beforementioned law, till it cuts the extension of the pier's border (line V-IV), according to map number 1.046-C-76 (1)..”

Overlaid pictures,Google Earth 2011 and 1986 Catastro's map. The area of the reserve is larger than the area we walk. To the northeast there is a free area and to the South the southern Canal lies within the Reserve. 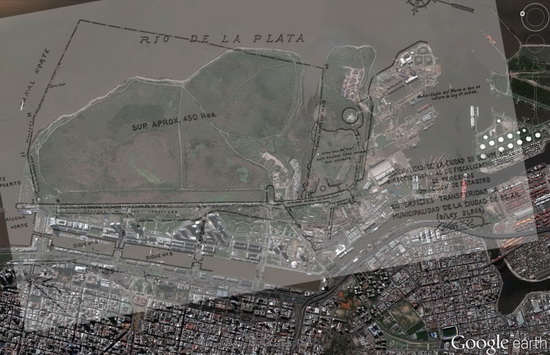