(Sensitive content)
"As we were walking along the Lizard Path Gaby told me: "Look how fast this duckling is moving", I took a photo and there came a female rosy-billed pochard, took it from the head, shook it leaving it badly hurt. The female swam away and a minute later she came back and again took it from the head and this time killed the duckling. Once she finished she came back with her four ducklings. As this was taking place there was another female rosy-billed pochard protecting her own ducklings at the edge of the pond. We did not know whether the female pochard killed it because it was his own or it belonged to another family or another species. Everybody was quite shocked to see this event." 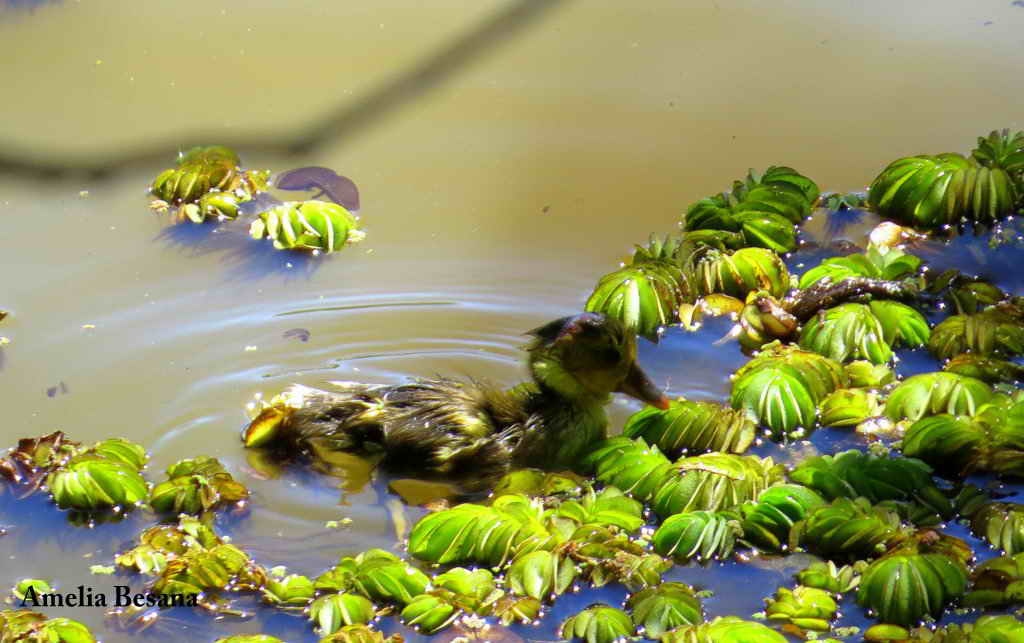 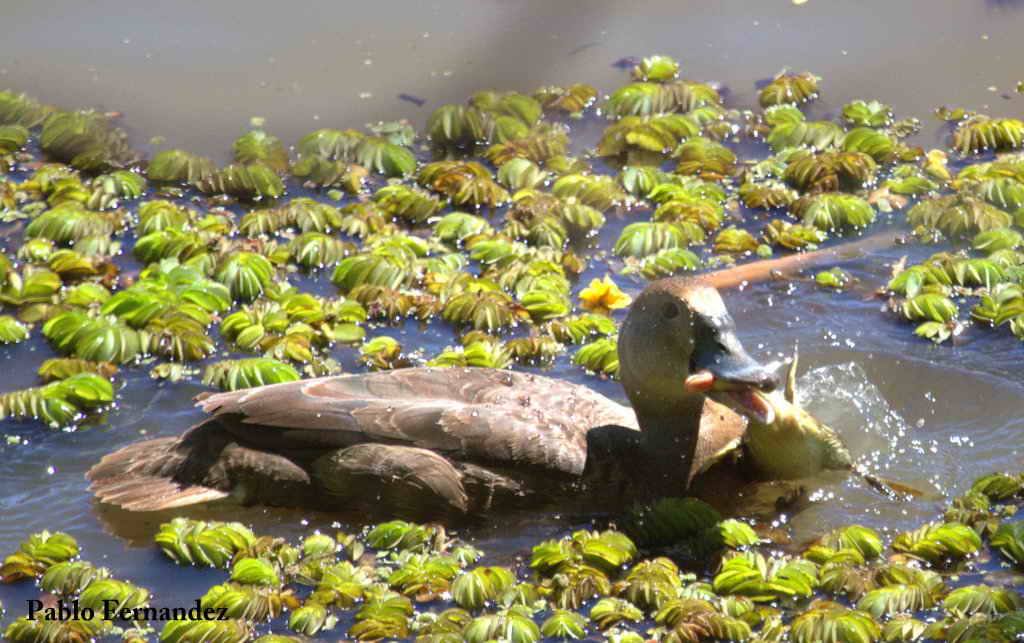 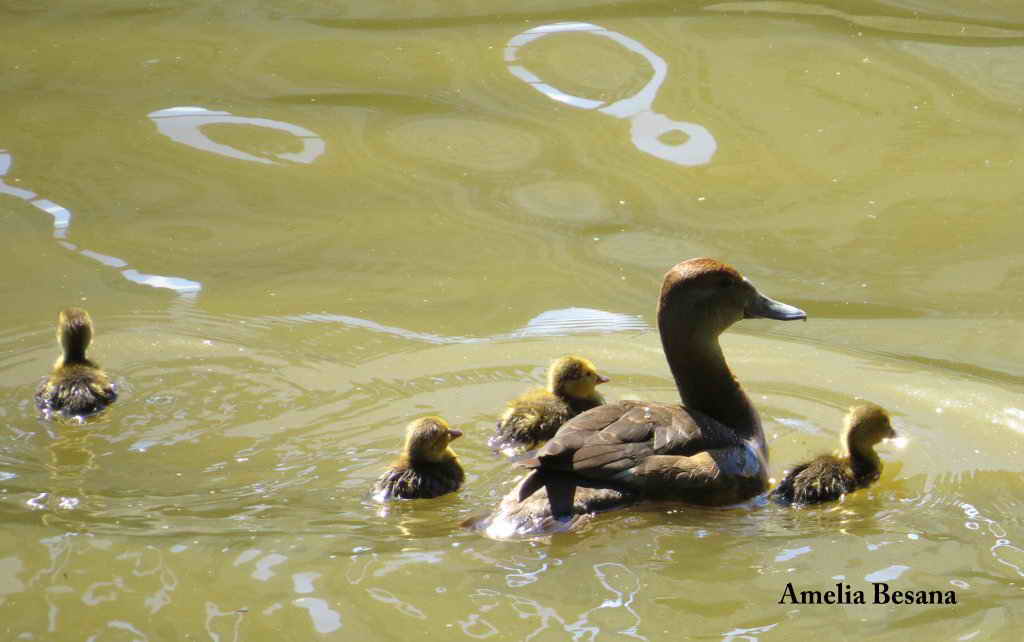 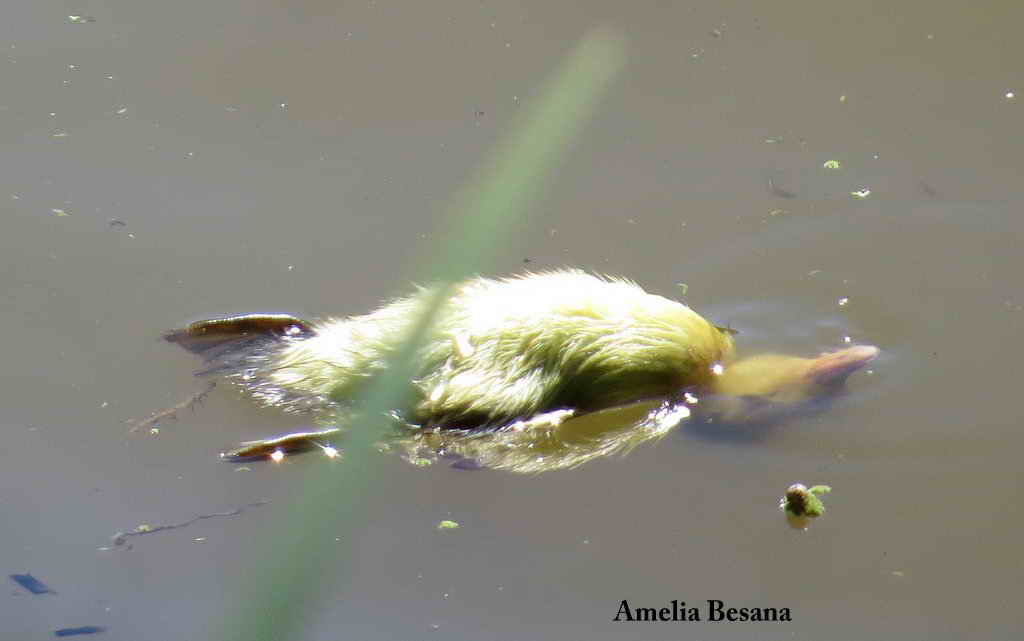 
This is the first case of a duckling killed by a conspecific. If it is not nice to see a duckling being attacked by a raptor though we understand it as survival, this seems unimaginable. Nevertheless, these infanticidal cases are much more commonly reported on the internet.
Infanticide is the killing of a young by a same-species adult (conspecific). If th adult is the parent then it is a filicide. There is another type of killing to which youngs are exposed - that caused by a brother in which case is called fratricide. This practice is common among young which stay in the nest and are fed by the parents. Where there is scarcity of food the bigger may end up killing the rest. Herons are a good example and have been thoroughly studied.
Though in most cases the doer is a male, here it is carried out by a female. But it is not so striking since in this species it is the female alone which is in charge of the ducklings. The male does not participate in the process of nesting and raising. The victim is a rosy-billed pochard duckling. It seems bigger than the ducklings of the perpetrator. So it would not be her own.

Unluckily the story had already begun when they discovered the duckling and photographed it. But its plumage shows that it has already been sunk. From the story there were at least three attacks separated by a time interval. May be the victim got desoriented, mixed with this family and had a tragic end. The duckling might belong to the family at the edge, but we do not know that.

Why this infanticidal behaviour? Though it may seem brutal to us the infanticidal behaviour may be an adaptive behaviour. There are several hypothesis to explain this fact and they refer to two main causes: one survival (lack of food, or breeding sites, or space); the other one, genetic hegemony (not to adopt unrelated young or get rid of a clutch to have one's own).
Of all these hypothesis some may be discarded right away. Space might be a matter of discussion. Though the pond is very bing and there seem to be few birds, it is also true that there is not enough free space to stand on. And families with their young need to keep distance one from the other. At this moment there are too many rosy-billed pochards in the pond. They outnumber all the other species together. If room is the cause, we would probably have more casualties.
It could also be that the female wanted to avoid the adoption of an unrelated young. As we have already had cases of parasitism by Fulvous Whislting-Duck (See cases) this would lead us to think that female rosy-billed pochards only recognize what is born in the clutch. A posteriori they reject latecomers.


On two other occasions I witnessed critical situations involving young, but not with this sad ending. The lost cygnet and The orphan ducklings. In the coscoroba cygnet the adult moved this cygnet away from his own and deserted it. The second case is an interspecies case. The parents of a ringed teal family choose to abandon a group of orphan rosy-billed pochards.